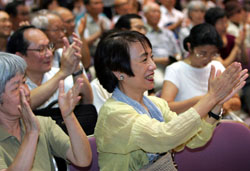 The Tokyo District Court on Thursday ordered the Tokyo Metropolitan Government to pay 12.03 million yen, or 30,000 yen each, in compensation to 401 teachers who objected to a city directive obliging them to stand and sing the national anthem at school ceremonies.

Teachers have « no obligation to sing ’Kimigayo’ while facing the national flag, » presiding Judge Koichi Nanba said in handing down the ruling. « To force anyone to do so would violate their freedom of thought and conscience. »

In what the plaintiff’s lawyers called an « epoch-making verdict, » Nanba said Tokyo’s directive was invalid and breached the Fundamental Law of Education. He also said the capital’s interference in the matter was unsuitable.

« The court acknowledged all of our claims and requests. This is probably the best ruling in a trial related to the education system, » lawyer Hiroshi Oyama, 75, said at a news conference after the verdict.

Another plaintiff, Eishun Nagai, 59, rejoiced upon hearing the ruling. « We felt pressured, and we felt we were treated unfairly. But our claim was finally admitted today, » he said.

In addition to demanding 30,000 yen each for emotional damage, the plaintiffs requested the directive be nullified to confirm they were not obliged to sing « Kimigayo » while facing the Hinomaru flag during school ceremonies.

Although the board of education had issued similar directives in the past, Tokyo’s 2003 directive was the first to state that any teacher who refused to follow the order would be punished.

Most of the 339 teachers penalized under the directive were among the plaintiffs. The penalties included official warnings, pay cuts and suspensions.

One, a 52-year-old science teacher at a Nishi-Tokyo high school, said the directive was « clearly illegal » and « difficult to understand. »

The teacher, who asked not to be named, received an official warning from the board for refusing to stand up and sing the national anthem at a graduation ceremony in 2004. « It’s not that I disregard the anthem or the flag. But I believe I have my freedom to my own opinion, and the directive interfered with it, » the teacher said.

At issue was whether the court would consider the directive as contravening the rights of teachers as individuals amid increasing government efforts to promote patriotism.

Tokyo government officials had claimed the instructions were based on guidelines set by the education ministry in 1999, which says schools must fly the national flag during official ceremonies and that teachers must lead the students in singing the national anthem.

The plaintiffs argued that the directive violated the Fundamental Law of Education, which prohibits inappropriate interference in education by the government, and infringed upon the teachers’ constitutional right to freedom of thought and conscience.

After the verdict was announced, the Tokyo Metropolitan Board of Education released a statement stating that the judgment was regrettable and that it would study the ruling before taking further action.

Although « Kimigayo » and the Hinomaru flag were officially recognized as Japan’s official symbols in 1999, they remain controversial because they are often considered icons of the country’s militaristic past.